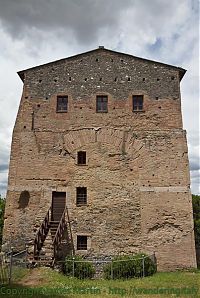 We’ve spend an interesting couple of days in Lazio. Folks don’t go there much, except to visit Rome. But the Roman influence spread along its roads—and they were built to last a long time.

The Via Flaminia, just outside of Rome heading north then on to Rimini, is less known than the Appian Way, but no less compelling. Along it is the Villa of Livia, third wife of Emperor Augustus, an interesting place to visit although quite ruined. More later.

Further north is a place called Malborghetto, which you see on the right. It’s an interesting structure, isn’t it? It started life as an crossroad arch commemorating Constantine’s victory over Maxentious, in which the cross appeared in the sky with words to the effect that “with this you shall win” or “conquer with this” (in hoc signo vinces in Latin).

He did. Maxentious fell in the Tiber and died.

The battle of the Milvian bridge started here, at what was to become Malborghetto. Christianity, after the battle and the myth surrounding it, became quite popular, and Constantine is celebrated as a saint in Sardinia, the battle commemorated there in the festa called L’ardia di San Costantino in little Sedilo.

You can walk from Malborghetto to the Milvian Bridge to see how the battle progressed over the landscape.

But just look at the building (you can click on it to make it bigger). That’s Roman construction on the bottom. On the top, the oddly slanty bit, is medieval. Reuse at its best. Or worst. Eventually Malborghetto became a place where folks on the way to Rome came to eat, maybe to stay. The name hints that many of them may not have left here with all their possessions; this is the bad little village.

On the grounds of Malborghetto you can still see the traces of the ancient Via Flaminia and the traditional monuments, mostly funereal, alongside the road, along with the traditional vegetation that screams “Rome!” to you. Well, at least it screams Rome to me.

Those of you who’ve “done” Rome may wish to explore this interesting area. The rural landscape around Rome is quite compelling, as I’ve tried to show in this picture of Castelnuove di Porto.

And I thank Wendy of Flavor of Italy for being our guide for the morning.

Commenting is closed for this article.

Disclosure: Content on these pages may contain affiliate links, which allow us to bring this free content to you.

We partner with bookshop.org, an online bookstore that promotes local bookstores and indy writers, to bring you our recommended guides.