Visit the Hermitage with restored Scriptorium mentioned by Dante

Imagine a hermitage nestled in the mountains of Le Marche, old enough to be mentioned in Dante's Divine Comedy. It offers the wandering visitor a historic library and medieval Scriptorium to visit.

The drive to Fonte Avellana in Le Marche is idylic--if you're one to enjoy the open and winding forest roads. When you come upon the Monastery, it's as if you had come upon a glorious hotel, a country retreat for the famously rich. It is, as they say, "gloriously austere".

This balance is good. Lay people can visit the monastery. Regular tours are given, although not always in English.

The monastery was founded in 980. Pope Paul II visited in 1982, elevating the status to Minor Basilica.

What's there to see? Well, if you've ever wanted to know how monasteries evolved to copy manuscripts, one of the most interesting parts of Fonte Avellana is the scriptorium, the specially designed room where monks could do the work of copying ancient texts in complete silence.

Interior of the Scriptorium

The room, pictured to the right, has ample windows. More than ample. If you harbor the romantic notion of a monk happily scrawling words on parchment by the light of a candle, well, remember that fires were likely not allowed where there was a great number of manuscripts.

The Avellana scriptorium furthermore was designed to take advantage of every available ray of sunlight during the daytime. This made the working day a long one. This state of affairs didn't make some of the monks happy, as recorded by in The Swerve: How the World Became Modern by Stephen Greenblatt, who gives us a taste of some of the telling sentiments written in the margins of old manuscripts:

"Thank God, it will soon be dark." "Let the copyist be permitted to put an end to his labor," a weary monk wrote beneath his name, the date, and the place where he worked; "Now I've written the whole thing," wrote another. "For Christ's sake give me a drink." 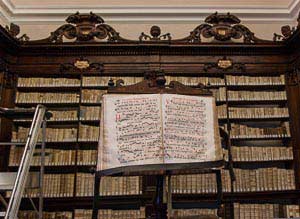 The Fonte Avellana historic library was founded in 1733. It has around 15,000 volumes starting with the beginning of the printing press (the oldest is from 1470).

If you call ahead, you can eat a very good meal at Fonte Avellana, a popular thing to do on Sundays and religious holidays (on the day we were there there was only one other diner). There is also a small cafe/bar open to the public, which also sells goods produced in the monastery.

Tours of the monastery are given from Monday through Saturday: 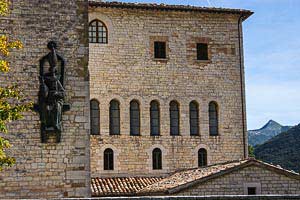 Exterior of the Scriptorium

On Sundays and holidays you can visit every 30 minutes from 10 to 12, and 2:30 to 6 in the afternoon. Aways check the hours on the official contact page before planning a trip. Get nice pictures of the monastery and its setting from the official site's home page.

Where to Go from Here Easily

As you can see from the map below, Sassoferrato is to the southeast. The churches and castle are interesting to see, and the important Roman site of Sentinum and the Abbey of Santa Croce is there as well. Gubbio is to the southwest.

Don't miss a visit to the Frasassi Caves.

Disclosure: Content in the following sections contains affiliate links, from which we receive a small sum that allows us to bring this free content to you.

We recommend La Piazzetta di Pascelupo for those who want a very inexpensive yet well-appointed apartment in a little village just across the border in Umbria..

There is also a highly regarded B&B called Locanda della Valle Nuova located 12 km south of Urbino. They have many suggested Marche itineraries on the site. Owner Guilia da Urbino writes on our facebook page:

We usually suggest a loop visit to our guests including Fonte Avellana, Sant'Emiliano in Congiuntoli and Sitria (in and out the border between Umbria and Le Marche) and lunch in Frontone (another beautiful tiny gem).

Near the town of Morro D'Alba you'll find Solebello, where you can rent a vacation apartment in Marche wine country. You'll also find the famed Lacrima di Morro d’Alba wine there. The towns of Gubbio, Urbino, Loreto, Ancona and the Republic of San Marino are all within an hours drive if you wish to make this a hub for your Eastern Le Marche explorations.

You can also visit the area as a day trip from Urbino: Urbino User-Rated Hotels.

The map shows the location of the monastery. It is normally reached from the hill-town Frontone, which you can see by zooming out. Cagli is also a popular town to visit to the north.

If you're looking for a way to meander across Le Marche to the sea, discover the attractions along the Metauro river valley to the town of Fano on the sea.