Discover Rome, the Etruscans, and a Very Interesting Coast

Italy's most underrated regions? Lazio is certainly in the running. Is there vacation life after Rome? Oh, how can we possibly count the many compelling towns, villages and archaeologlical sites? Certainly you know Tivoli and Hadrians Villa, the painted Etruscan tombs of Tarquinia and Cerveteri, the olives of coastal village of Gaeta, Ostia Antica, the ancient port of Rome, the Castelli Romani and Frascati wine. The list goes on and on. You could spend a year wandering the 6,655 square miles of Lazio without feeling a hint of boredom.

Lazio is also home to the Caminno di San Benedetto, a pilgrimage trail recently modernized. Anita Breland was one of the first to walk it, and summarizes how a pilgrimage walk might be different than a casual stroll:

Our walk also took us into hilltop villages, introducing us not only to the flavors of the region, but also many of the people who prepared and served our meals along the way. ~ Hospitality, Lazio Style

Lazio is the second most populated region of Italy and the capital of Rome is Italy's largest city.

Getting Your Bearings in Lazio

Lazio has five provinces, marked on the map in bold type. The most populous is Rome, with around 4 million people. The others are Frosinone, Latina, Rieti and Viterbo. The area of Lazio, also called Latium, is 17,207 square kilometers.

Welcome to Etruscan country. The gray dashed line on the map indicates the approximate boundary of the historic territory called Tuscia, which once included all of Tuscany, northern Lazio and a part of Umbria. The Frescoes of Tarquinia's Etruscan tombs and the museum beg to be visited by tourists wanting to understand this region and historic period.

Viterbo itself has a compelling medieval core. Head first for the Palazzo dei Papi, the Palace of the Popes to see the Gothic structure built for the popes who made Viterbo their home from 1257 to 1281. Viterbo's civic museum is housed in the cloister and nunnery adjoining Santa Maria della Verità. You'll see some Etruscan stuff (and a monk's cache of fake Etruscan antiquities) as well as an art gallery. For more Etruscan artifacts, head for the Museo Nazionale Etrusco, the national Etruscan museum housed in the Albornaz fortress in Piazza della Rocca.

Bomarzo hosts the famous "Monster Park" conceived by Pirro Ligorio. It's not a "big" park but a park of mythology and fantasy born in 1552 as a "Villa of Wonders". Fascinating place.

This was the ancient capital of Sabina, set on the slopes of the Sabini and Reatini mountains. St. Francis of Assisi was known to wander this way.

There are lots of opportunities for excursions to natural oases, castles, fortresses and Franciscan sanctuaries.

Rieti sports a Roman bridge and Roman city gates. The centerpiece of the historic center is the many Renaissance palazzi, especially the ones on the edge of the Piazza Cesare Battisti. The velino river runs through town.

Along with the Piazza Cesare Battisti, the top attractions are the Cathedral built in the 10th century and rebuilt, the Convento di Fonte Colombo (an old hermitage where St. Francis had an eye operation and after 40 days of fasting came up with the Franciscan rule) and the Convent of La Foresta where St Francis performed the miracle of the vine and wrote the Canticle of the Creatures.

Fara Sabina makes a good starting point for visiting the medieval towns, castles, parks, and wineries of the Sabine Hills. The Sabine Hills, where olive oil has been produced for at least 2000 years, had the first olive oil to receive DOP status in Italy, and good red and white wine is produced here in several small wineries.

The Rieti province and the Sabine Hills are among the greenest areas of Italy, due to the abundance of water springs, rivers and lakes. See the impressive castles in Frasso Sabino and Rocca Sinibalda dating from the 10th and 11th centuries, and wander through walled medieval villages like Toffia, Fara Sabina, and Farfa with their picturesque alleys and squares, decorated Renaissance palaces and ancient churches--without hordes of tourists.

Foodies once headed toward Amatrice, home to the hog jowl based sugo all'amatriciana before the earthquake that leved it. The town was the Lazio gateway to the Gran Sasso e Monti della Laga National Park. Just a hop, skip and jump over the mountains brings you to delightful Ascoli Piceno in Le Marche.

Rome province extends from Civitavecchia on the Tyrrhenian coast to south of Anzio. There are still remnants of the Etruscan civilization at Cerveteri, an Etruscan necropolis built between the seventh and third centuries BC. Along with Tarquinia, the two sites make up a UNESCO world heritage site.

Cruisers: Note well the location of Civitavecchia, the cruise ship port of Rome, with relation to the center of the Eternal city. The distance is 50 miles. You're not going to run into central Rome for a coffee when you have a half an hour before departure. See: How to Go to Rome or the Airport From the Cruise Ship Port.

South of Rome you'll find the Colli Albani, a landscape made up of "dormant" volcano cones. Today the area called Castelli Romani is a pleasant and popular retreat from the heat that builds up in central Rome. In fact, the summer home of the Popes is here at a town on the southwestern side of Lago Albano called Castel Gandolfo.

Wine lovers have the DOC Colli Albani wines to focus on in this territory. Pork lovers will retreat to the town of Ariccia where the roast young pig called Porchetta di Ariccia is as famous as the Frascati DOC wine.

There are quirky sites in Rome province as well. Looking for a hippie hill town, known for the disappearance of the Holy Foreskin? Calcata is where you'll want to head. Just north of Rome on the Via Flaminia is Malborghetto. It's the pilgrim's last stop before entering Rome, and a "bad little borgo" at that. It's not far from the Roman Villa di Livia; both can be done in an afternoon.

Lazio is so compelling of a travel destination that even the area around the large, international airport, Fiumicino (FCO) is full of things to do, from scuba diving (in the Carribean of Italy!) to seeing the ruins of Ostia Antica. See our Fiumicino Airport Guide for the details.

Frozinone is immersed in stunning scenery that tourists don't stop to see. The town of Anagni has a splendid Romanesque Cathedral and a frescoed crypt. Ferentino also sports a Romanesque Duomo and adds remains of a Roman market and theater to its list of attractions. Fiuggi is made up of a medieval section and a lower modern spa town.

The crown jewel of the province is the historic abbey called Abbazia di Montecassino, begun by Saint Benedict in 529. It was subsequently destroyed by Langobards in 577, Saracens in 887, an earthquake in 1349 before the allied bombardments of 1944 almost flattened it (you can take a tour of the Battlefield trails of Monte Cassino from Viator).

Each time the Abbey has been rebuilt. Today it makes for a stunning visit. That's the interior of the Basilica below.

Ciociaria: A Land of Ancient Silences

An amazing historic territory with indistinct boundaries around Frosinone 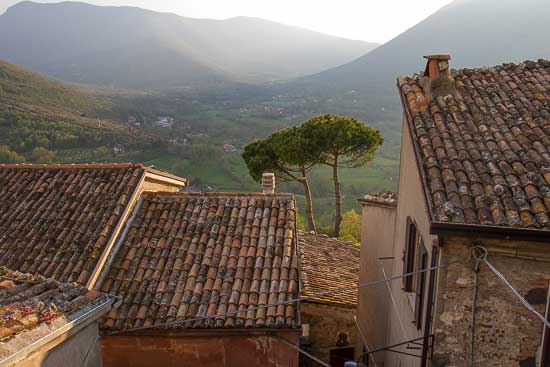 The word tied to the region has ties to a shoe worn by shepherds, the Ciocia. Like the landscape, the traditional festival music of Ciociaria weaves its way into your soul.

Ancient Romans who lived here had odd customs as well. Have you ever heard of a Glirarium? You'll never guess what it is.

Read more using the buttons below. 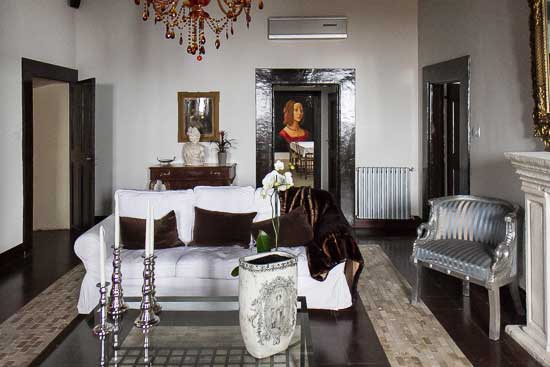 Want an elegant, yet very comfortable place to stay in this ancient land? The town of Castro dei Volsci offers an insider view of this diverse land. At Casa Gregorio you'll be introduced to the local food though the cooking classes held in a 17th century palazzo. We've stayed there for a short time and the only regrets we have is that we couldn't stay longer.

There is way too much to see. Really.

The focus here in on the coast. Roman emperors preferred it. There is a ruin of a Nero villa at Anzio, where one of WWIIs bloodiest battles were fought along a 15 mile stretch of Italian beach.

Tiberius, the Caesar that the Bible's phrase "Give unto Caesar what is Caesar's" is all about, built a villa along the sea which included a triclinium or dining room in a grotto so he could feed guests and show off his sculptures in a cave below Sperlonga, a town with a medieval core and a beach, just in case you're traveling with warring factions of beach people and history people. You can visit the ruins (which really are ruined, see the picture below) and don't miss the museum, National Archaeological Museum and Villa of Tiberius. Sperlonga is a favorite place of seaside relaxation for Wendy, who runs Flavor of Italy culinary experiences.

Formia is home to a mausoleum thought to be the Tomb of Cicero, and features one of the world's largest Roman cisterns. There's also the remains of an ancient Roman port. It's halfway between Rome and Naples.

Gaeta is a beautiful city in Lazio, but you won't find it in many guidebooks. It doesn't have a train station. Italians in cars flock to the seven beaches in summer. Eat fresh seafood and the famous Gaeta olives. Locals will tell you that Tiella di Gaeta is a must-try dish. Tiella looks like it was prepared in a springform pan and has two crusts. It's stuffed with seafood, vegetables or a combination of the two.

When to Go to Lazio

The best times to go are May though June or September through October. November and December are likely to have the most precipitation. Summer in Rome can be stiffing, although Rome is likely to be as empty in August as you've ever seen it. Italians prefer late September into October for their Roman Holiday.

Where to go from Lazio

Here are the regions of Italy sharing borders with Lazio. Click for a map and visiting information.

Find out what the weather might be with our month to month climate charts for major tourism cities. Going on to other cities in Europe? See European Travel Weather.