Roman Baths and More Along the Via Appia Antica

Capo di Bove was once a farm with vineyards built along the Appian Way on the rural outskirts of Rome. When the property was purchased by the Italian Government in 2002, the vineyards obscured the real ancient treasure, the thermal baths of a vast property owned in the 2nd century AD by Herodes Atticus and his wife Annia Regilla.

The baths are the main attraction on the property, but it would be a shame to miss the exhibits showing maps and photographs of the Appian Way in the first half of the 20th Century, like the one below:

The site also includes a former farmhouse converted by the previous occupant of the site into a villa. In its walls you’ll see a vast array of artifacts from the Roman ruins found on the property, as you can see in the picture below:

The grounds also host a variety of artworks like modern bronze statues.

This Via Appia Antica attraction sits closely by others in what I call the “tenderloin” of the Appian Way. Good Roman food is available just up the road heading to central Rome at the restaurant called Qui Nun Se More Mai. Continue on and you’ll find the popular Tomb of Caecilia Metella as well as the Circus of Maxentius.

As you enter the site you’ll meander through some gardens and come upon the baths. Plowing of the soil has no doubt left the stubby walls, all at the same height. The mosaics are in pretty good condition, as you can see.

The main building on the site hosts offices, a conference room, spaces for events—but what you’ve come for is the Antonio Cederna Archive and Library. Mr. Cederna is said to be the the father of the ecologist movement that was very committed to the protection of the Old Appian Way

Along its entire length, and for over a kilometer on both sides, the Appian Way was a single monument should have been preserved intact because of its history and legends, its ruins and its trees, the countryside and landscapes, the views, the solitude, the silence, the light, its dawns and sunsets… it should have been saved because for centuries talented men the world over had loved it, described it, painted it, and sung of it, transforming it into a fantastical reality, a spiritual moment, and creating a work of art from a work of art: The Appian way was untouchable, like the Acropolis in Athens”
—A. Cederna, The Gangsters dell’Appia, Il Mondo September 8, 1953 quoted from the Archivo Antinio Cederna where you can get a preview of the historic work of archaeologists and photographers along the Appian Way.

If finding out about the Appian Way and its history is meaningful and fun for you, you might consider staying right near Capo di Bove in a country villa with four bedrooms called, oddly enough, Copo di Bove. 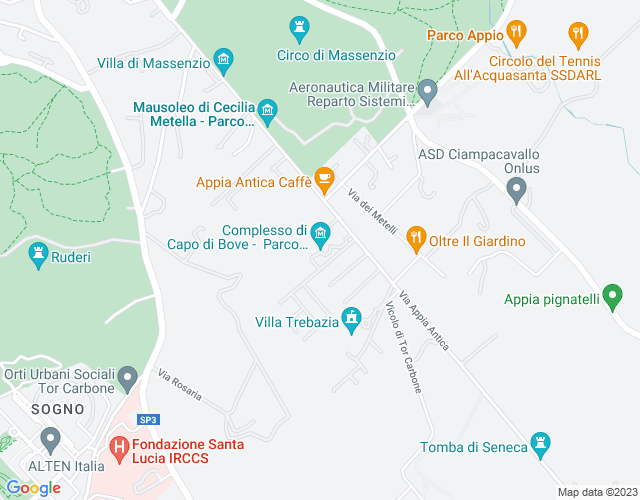 See an interactive Map of the Attractions along the Appian Way.

She Seduced Me: A Love Affair with Rome