The Valcamonica is a narrow, north/south trending valley in the Lombardy Alps, bounded on the south by Lago d'Iseo and cut by the river Oglio all the way to Ponte di Legno. The name Valcamonica comes from the pre-indoeuropean people named Camunni, who were conquered by Rome in 16 BC.

The Valcamonica is home to one of the world's richest collections of prehistoric petroglyphs--over 140,000 artworks covering 8000 years have been discovered, and was the first Italian site to go on UNESCO's World Heritage List in 1979, beating out such notable human achievements as Rome's Coliseum and Leonardo da Vinci's fresco of The Last Supper in Milan.

You can get there by train from Brescia, a small one that snakes its way along the eastern edge of Lago d'Iseo, then follows the river Oglio to Edolo if you want to take it that far.

The Valcamonica is stunningly beautiful, the rock carvings (petroglyphs) are quite interesting, and the valley has numerous hiking trails to discover.

Map of the Valcamonica 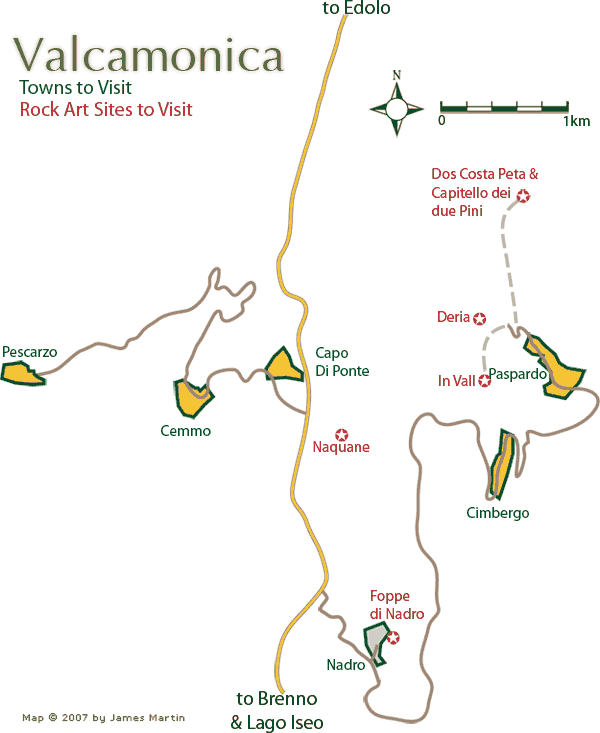 Our Recommendations for a visit to the Valcamonica

The yellow road on the map is SS42, the main north-south artery through the Valcamonica.

Hikers will want to be near the trailheads. We recommend staying in Pescarzo, a historic mountain village on the main road heading west out of Capo di Ponte. Many trails in the Valcamonica branch from Pescarzo. The I Camuni Bed and Breakfast is highly rated and inexpensive, and many of the rooms have great views.

If you're there to see the rock art in the most efficient manner, you may wish to stay in Capo di Ponte. The new Graffitipark hotel might be just the thing for large groups and children, and is a new hotel in Capo di Ponte. For other user-rated hotels in other Val Camonica Locations, see Hotels in Val Camonica. While in Capo di Ponte, don't miss the excellent archaeological museum in the historic center, Museo Nazionale della Preistoria della Valle Camonica.

Budget travelers might wish to stay in Breno, a little further away, where a hostel is available.

You'll notice from the scale, that the area of the map is quite small. You'll see lots in a very short time here.

If you only go to one site, I'd visit Naquane. Also take time to see the Regional Reserve of Rock Art Engravings of Ceto-Cimbergo-Paspardo in Nadro di Ceto, then on to the Riserva Regionale Incisioni Rupestri (regional reserve of incised rocks) north of Paspardo. Allow at least two days for all of this. A map and opening times of all the sites are found here.

If you have time to take a walk through a very interesting town which retains its traditional character, we recommend a visit to Pescarzo. You can also stay in Pescarzo and use it for a base from which to take walks in this fascinating territory.

Rock Art: Does it have something to do with music?

Rock art is a general term to describe art carved into stone. Other terms are "petroglyph" and rock engraving." It's not about pretty, wall-hanging art, much of this art had quite a bit of utility. In the Valcamonica, the art depicted maps, the general design of houses and even a few sexual acts. Scientists have uncovered recent evidence for that some of the glyphs were a form of language.

Rock art in the Valcamonica dates from the Paleolithic to the Medieval (let's say there's some modern in there too, after all, graffito is the italian word for scratching or incising, a word applied to old art as well as what happens today with unthinking folks looking for their five minutes of infamy).

In the figure above, on the right you'll see a rock art depiction of a "house" and some folks either fighting or making love (how can you tell, they're stick figures!) if you look long enough. In any case, many of these depictions of dwellings are found in the rock engravings, and a replica from those "plans" was built so visitors and archaeologists could envision the dwellings as they might have been.

Volunteering in the Valcamonica

Each of the many recently discovered petroglyphs needs documenting. You can help. The Footsteps of Man Archaeological Cooperative Society conducts summer fieldwork sessions. For information see Rock Art Fieldwork.

There is a facebook page where you can get the latest infomation on the Valcamonica Rockart Fieldschool.

The next valley to the north, the Valtellina, is a good place to explore as well. The Valcamonica is in Italy's Lombardia (Lombardy) region.

This petroglyph from Naquane National Rock Art Park depicts women in prayer over the downed figure in the river, a real depression in the rock that fills with water after a rain.